Today’s RTÉ Weather bulletin following the One O’Clock News saw weather presenter Helen Curran transformed into a Minecraft version of herself along with the Weather Map of Ireland.

To celebrate the first-of-its-kind broadcast of the Minecraft children’s competition esports final, ‘Ireland’s Future is MINE’, the RTÉ Weather bulletin was also interrupted with a special guest appearance by Irish Minecraft superstar RoPo*. 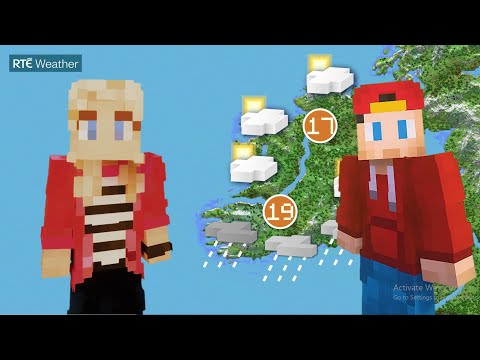 Ireland’s Future is MINE TV final is the culmination of an All-Ireland digital competition by RTÉjr & Microsoft’s Dream Space which saw Irish schoolchildren re-imagine an Ireland of the future using Minecraft Education Edition.

The final is hosted by well-known RTÉ Young People’s Presenters John Sharpson (Home School Hub; Bright Sparks) and Mary Claire Fitzpatrick (Ace My Space; Martin’s Shed) and has a stellar judging panel, with Irish YouTube & TikTok Minecraft superstars RoPo & Classic Reilly on hand to keep a watchful eye on the two skillful teams as they battle it out in the unique Arena.

Ireland’s Future is MINE airs on RTÉ2, RTÉjr and RTÉ Player at 5pm today (Thursday) and available on catch up.

* Ronan Power, aka RoPo, is an Irish YouTuber and member of the ‘Little’ club – the hugely popular Minecraft content creators. Ronan has 1.75 million subscribers to his YouTube channel, The Mine Vengers. He is one of the judges on Ireland’s Future is MINE